Q: What do you do when you’re being scammed by a Chinese scam artist? A: Use their country’s internet censorship against them.

LINE, the hugely popular Japanese messaging app, has been seeing a recent surge in scamming activity. In the most common scenario, the scam artist will gain access to a user’s account and message their friends, asking them to purchase online gift cards and send the serial number. Many people were targeted by this scam, and it received some mainstream media attention.

But once it was determined that the majority of the scam artists were Chinese, the users began fighting back in a hilarious way.

The magic word is “Tiananmen Square Incident” (天安門事件). By sending this in the chat, the scam artists now risk having their network activity flagged by Chinese censors, and subsequently having their connections cut off. Most of the time, the scam artist will proactively delete their account to prevent this from happening.

Creative ways of dealing with scammers are always fun to see, but this is a wonderfully elegant solution that gets immediate results. 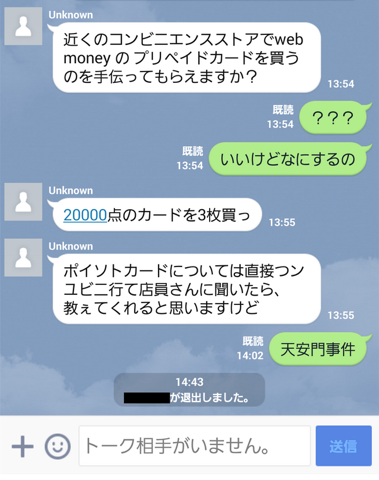