In this review, I'll talk about a few parts of the game that stood out to me, and I'll do my best to do so while avoiding spoilers.

Detroit: Become Human is a story-heavy adventure game developed by Quantic Dream, the studio I knew best as the creators of Heavy Rain.

The story takes place in a future where androids are commonplace and indistinguishable from humans aside from a computer chip placed on their temple. Predictably, the androids are mistreated and repressed by humans, and you eventually find yourself in the middle of a robot uprising.

You assume the role of three different characters with interweaving narratives, and the actions you take as each character determine the course of the story. The result is a giant web of branching storylines with many different possible outcomes.

The key to making this type of game engaging is how well you can sympathize with and roleplay as the protagonists. If you understand the characters and their motivations – and can see the world through their eyes – each of the actions you take over the course of the story becomes more meaningful.

Robots do as they are told

In one early scene, you play as an android who is newly hired as a maid. You are set to performing menial tasks around the house, like picking up trash and washing dishes. Working through these tasks establishes your role as someone who does what they are told (It was even a little unnerving how eagerly I worked on these missions, happy to keep checking off finished work in the mission list). Because of this initial set-up, taking an action that goes against your owner’s orders becomes a much more meaningful scene.

What should I want to do?

While playing as another of the three main characters, an early scene presented what I thought would be a difficult, morally ambiguous decision to make. But as I was considering what the best action might be, the cutscene continued and the character made his own decision without any input from me. I was relieved that the difficult choice wasn’t my responsibility, and this scene was very important in establishing who this character is and how he behaves in certain situations.

But it was this character that I had the most difficulty playing as the story progressed. I was never sure if I should make decisions based on “What I want to do” or “What I think he would do” or “What I think he should do”. Do I follow my understanding of this person’s personality and values, or do I push him to change and break out of his mold? Probably because of my indecision, I ended up not being able to do a good job of either. Seeing the conclusion of the story showed me which decision would have led to a more positive ending, but the right path wasn’t clear to me on my first playthrough.

Detroit: Become Human shows you how your decisions affect the story in the form of a map with branches leading to different outcomes. 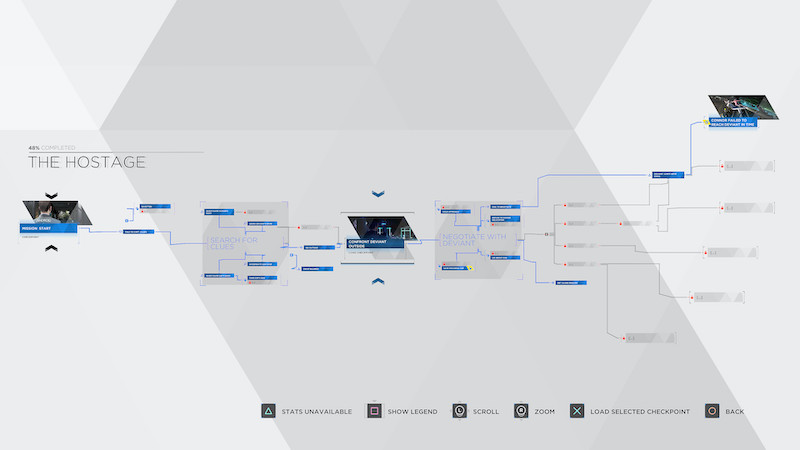 The story map of the first chapter

I’m not sure if this is a feature common to adventure games (I hadn’t seen it before), but this was a godsend when making multiple playthroughs. You can even jump to a point in the story that you had already seen and start playing again from that point, free to make different decisions to unlock new parts of the story. You can’t help but wonder what would have changed if you acted a different way, and this lets you see without having to start the game from the beginning and skip through 80% identical cutscenes. It was because of this freedom and ease of access that Detroit: Become Human became the first game in recent memory in which I unlocked 100% of achievements.

Purists might say that this ability to jump around the story detracts from the experience, but I honestly think I wouldn’t have played the game a second time without it. As a result, this feature is what allowed me to experience the amazing story in its entirety.

If the developers had chosen to design a game that presents the story from start to finish in the best way possible, they might not have included this map. I think that many existing adventure games had this approach. But instead, I think this game chose to present the story including all of the branching outcomes in the best way possible. None of the paths is the one correct path. They all tell parts of the same story, and I was very glad to have had the complete experience.